Volatile yes, but the companies in the coal industry have a great deal of opportunity ahead of them. Aside from the recent cold-snap and the fact that there are a backlog of ships waiting to load in ports around the world, coal is still one largest sources of electricity generation in the world.

Several companies, including Patriot Coal (PCX), Consol Energy (CNC) and Peabody (BTU) have been showing some excellent trends when it comes to earnings, even with coal prices still being depressed. (Coal Spot pricing is $51.75 for March Contract at the time of publish)

Note: It is our impression that there is a potential for Patriot Coal (PCX) to be a perfect candidate for a consolidation play. It is the right size and has enough potential to create a good synergy for another energy company to absorb and benefit.

Even though volume declined, according to Bloomberg:

Coal ships queued to load for an average of 16.6 days, from 15.3 days a week earlier, Newcastle Port said. The waiting time compared with 0.14 day for general-cargo vessels. Select Coal Companies
(Click on each chart to enlarge) 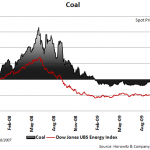 From Bloomberg.com (with our highlights):

Feb. 22 (Bloomberg) — A rally that has boosted coal prices 21 percent from their lows last year may have further to go as the coldest U.S. winter in nine years and China‘s record imports increase demand and drain stockpiles.

Prices will average $59.28 a ton this year, up 17 percent from $50.75 as of Feb. 19 on the New York Mercantile Exchange and 41 percent more than last year‘s low in April, according to the median of 11 analyst estimates in a Bloomberg News survey. Stockpiles at utilities swelled last year after a mild summer and the economic recession reduced power demand.

“We‘re definitely bullish for a confluence of factors,” said Jeremy Sussman, senior coal analyst at Brean Murray Carret & Co., a New York-based boutique investment bank. “We can see the light at the end of the tunnel in the U.S. The weather has definitely had an impact. The international market is front and center.”

Hedge funds have been buying energy producers, mining companies and airlines, a sign that managers from Louis Bacon to David Tepper are convinced the economy will accelerate. Duquesne Capital Management LLC, led by Stanley Druckenmiller, bought 6.2 percent of Massey, whose earnings are projected to double this year.

The increased U.S. and Chinese consumption prompted Michael Dudas, an analyst at Jefferies & Co. in New York, to raise his 2010 price target for coal to $70 per ton, a figure he originally forecast for 2011.

“The weather and better electricity generation have pushed stockpiles lower than people anticipated,” said Dudas, who has followed coal for a decade. “It‘s really just accelerating that price.”

Utilities have 57 days worth of coal on hand, down from more than 70 days at the start of winter, according to Genscape Inc., a Louisville, Kentucky-based energy data provider.

“The pricing increases are real,” Consol Chief Operating Officer Nicholas Deiuliis said in a telephone interview. “If you look at the pricing increases we‘re seeing now in regard to future sales, they have not only floored or held their bottom, they are starting to spike up.”

Coal is used to generate electricity and produce steel, making it a barometer for the economy. U.S. steel capacity utilization tumbled to 68 percent as of Feb. 15 from 91 percent in August 2008, according to the American Iron and Steel Institute, as unemployment climbed to 10 percent and consumers reduced spending 3 percent on appliances in December from a year earlier.

The U.S. summer from June through August was 7 percent cooler than the same period a year earlier, reducing demand for power to run air conditioners, according to the National Oceanic and Atmospheric Administration.

Utilities amassed a record 207 million tons as demand for coal to generate electricity dropped 12 percent through Sept. 30, according to the most recent U.S. Energy Department data. Consumption for 2009 was projected to be below 1 billion tons for the first time since 1995. The government will release final figures in March.

Producers cut back output as demand slumped and that‘s having an impact even as demand rises. U.S. coal production will slump about 2.8 percent this year just as exports increase 5.6 percent, the Energy Department said Feb. 10.

The 2009-2010 winter season, which began Dec. 1, is the coldest since the 2000-2001 season and ranks in the coldest third of winters in the past 115 years, according to Jeff Masters, director of meteorology for Weather Underground Inc., a private forecaster based in Ann Arbor, Michigan.

The federal government shut down for four days this month after Washington was hit with a storm that set a seasonal snow total of 54.9 inches, shattering a 110-year-old record.

For St. Louis-based Patriot, Pittsburgh-based Consol and Alpha, based in Abingdon, Virginia, the frigid conditions are providing relief.

“The cold weather is the best thing they can get right now that‘s not a full economic recovery,” said Daniel Scott, an analyst at Dahlman Rose & Co. in New York. “People are no longer scared to talk about thermal coal.”

The risk to forecasts for higher coal prices is a glut of natural gas in the U.S. and prospects for the economy to stumble as the Federal Reserve boosts interest rates for the first time since June 2006. The Fed last week raised the discount rate charged to banks for direct loans by a quarter point to 0.75 percent to encourage banks to borrow in private markets.

“If the economy tanks again, that changes the outlook,” according to James Rollyson, senior coal analyst at Raymond James Financial Inc. in Houston. “The economy and particularly this year natural gas prices are the variables. Coal lost market share to natural gas because we averaged $4 gas for the year.”

The U.S. relies on coal for about half of its power generation, compared with about 20 percent for gas.

Gas has to stay above $5 per million British thermal units to prevent it from being more attractive to utilities at the expense of coal. Natural gas for March delivery fell 14.9 cents, or 3 percent, to $4.895 per million Btu. Rollyson estimates that through November coal lost about 40 million tons worth of demand to gas.

China‘s National Energy Administration said Jan. 25 that a coal shortage will persist through March. The country has maintained the record import pace set in December because of the country‘s coldest winter in at least 50 years, according to Sutthichai Kumworachai, an analyst with KGI Group in Bangkok.

The country‘s gross domestic product expanded 10.7 percent last quarter from a year earlier, the fastest pace since 2007, after the government introduced a $586 billion stimulus package that spurred energy consumption.

China‘s appetite for coal led to imports from South Africa, diverting supplies from Europe and creating an opportunity for eastern U.S. coal companies such as Alpha Natural Resources, Consol and Patriot to increase sales across the Atlantic Ocean, Brean Murray Carret‘s Sussman said.

This year Consol has sold almost 500,000 tons of coal into Asian markets, a 23 percent increase from the 400,000 tons that it shipped to the region for the first time last year, Dan Zajdel, a company spokesman said. As more companies follow, the exports will squeeze U.S. utilities, said Pearce Hammond, an analyst at Simmons & Co. International in Houston.

“That‘s essentially robbing utilities of coal,” Hammond said. “They don‘t need it right now, but in the future they will.”

From the mid-Atlantic to the Southeast through the Gulf Coast into Texas, temperatures are averaging 4 degrees to 8 degrees below normal, said Tom Kines, a senior expert meteorologist with AccuWeather.com in State College, Pennsylvania.

“That is pretty significant,” he said.

The cold is having an impact as measured by heating-degree- day values, which have been trending higher along the East Coast and across the South, according to the National Weather Service. The value is calculated by subtracting the average daily temperature from a base of 65 degrees and is designed to show energy demand.

This month, New York‘s heating-degree-day value is 572, or 36 greater than normal, according to the National Weather Service.

Coal prices will get a larger boost if the U.S. economy can sustain its recovery, Alpha Chief Executive Officer Kevin Crutchfield said in an interview. The world‘s largest economy will grow 3 percent this year and next, according to the median estimate of 62 economists surveyed by Bloomberg News.

“That would be the best thing in the quiver, a bona-fide economic recovery, especially on the industrial side,” Crutchfield said. “If you see any type of economic stimulus and economic recovery at all, that would hasten the recovery even faster.”