Over the past year or so, Russia’s markets have in a love/hate relationship with investors. Often tied to the movement in oil and commodities, Russian equities have been in favor most recently.

We added a position to portfolios in December, only to be quickly in the red. As the position moved further down, we added another small position and have been pleased with the almost non-stop ramp higher since then.

The most recent “election” of Putin almost put the gains at risk as protests filled the streets. That has all calm down at this point – voluntarily.

We like the idea that Russia markets are commodity linked. Of course the sensitivity to oil prices cuts both ways. But, with the energy appetite of Asia, we believe that there is some support for the price of crude. Along with the Iranian conflict, that should put a floor on any short-term drop (for now). 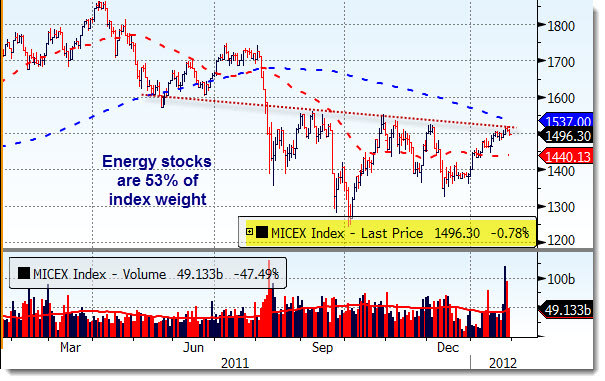 Obviously, any further slowdown in the global growth story will hit these shares hard. However, of late, Putin has been vocal about changing the structure of the Russian Economy.

Putin, who is running for president in March, vowed to sell state assets and reduce the reliance of the world‘s biggest energy exporting economy on commodity sales, according to an article he wrote in yesterday‘s Vedomosti newspaper. Russia‘s Micex Index INDEXCF slid 0.8 percent, leaving it to trade at 5.7 times analysts‘ earnings estimates for member companies, the least of the 21 emerging markets tracked by Bloomberg and the cheapest compared to Egypt‘s EGX30 Index EGX30 since Nov. 24.

“The more Putin talks the reform case, the more investors will become interested,” Kingsmill Bond, chief strategist at Citigroup Inc. in Moscow, said by phone from Frankfurt yesterday. “Russian equities, like many risk assets, remain cheap but Europe is still the key factor in determining market levels, and that‘s really outside of Russia‘s control.”